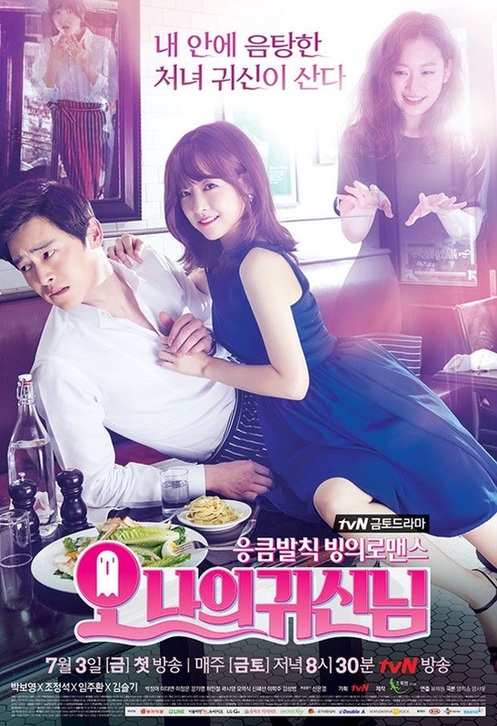 When I first heard of  Oh My Ghost (also titled Oh My Ghostess), I was thrilled. Here was a new drama that promised to combine the best parts of Pasta (the kitchen drama), The Master’s Sun (the crazy-but-loveable woman who can see ghosts), and Arrang and the Magistrate (the amnesiac ghost trying to discover who she was in life and the truth of her death, complete with shaman frenemy)—AND IT DELIVERED! On all these promises and more.

Quick note: this review is also available as a podcast!

Set in a contemporary restaurant that seems vaguely Italian in nature, Na Bong Sun is a lowly prep-chef and all around go-for whose self-confidence is through the floorboards. Her response to anything that happens, whether she’s at fault or not, is to apologize. A fault that is compounded by the fact that she often is at fault—or more truthfully, the ghosts that no one else can see are at fault. The ghosts harass her at night, keeping her from sleep, and causing her to doze off at work. The ghosts pop up around the kitchen, causing her to make a scene in front of the other chefs. To keep them away, she burns incense in her tiny windowless room, causing her building manager to threaten her with eviction.

Bong Sun’s boss hates her bumbling, incessant apologizing. And of course, Bong Sun has the biggest crush on him. But even more than that, she loves cooking, wants to learn and wants to do well. She also writes a charming cooking blog where she experiments with cooking in a safe space. Her boss, Kang Sun Woo, is a huge fan of the blog’s authenticity not knowing it’s run by his less-than-stellar employee.

Enter Shin Soon Ae (played by Kim Seul Gi the scene-stealing-editor-yet-minor-character from Flower Boy Next Door and the friend/roommate in Discovery of Romance . . . actually she was the only reason I watched Discovery of Romance all the way to the end). Soon Ae is a young woman who’s been a ghost for going on three years. Problem with that is that if a ghost stays on earth for more than three years, they become an evil spirit. With this grisly and miserable end drawing near, Soon Ae is eager to fix whatever’s making her stick around so she can move on to the other side of the afterlife. Thing is, she can’t remember anything specific about her life or the way she died. Thinking her issue is that she died a virgin, Soon Ae has been possessing women to seduce men. But it’s not working. She’ll need to find a “man of vitality” to manage to hold her in his embrace and not die from the chill of the grave—and Kang Sun Woo fits the bill.

When Soon Ae possesses Bong to get close to Sun Woo, she causes everyone around the young chef to wonder at her sudden change in personality. Now she is outgoing and vivacious—and dead set on seducing Sun Woo.

The story is cleverly done and the humor is spot on. The actress playing Na Bong Sun (Park Bo Young) does a spectacular job portraying real-Bong and Bong-possessed-by-Soon-Ae. Unlike in other shows where the show runners have to depict the change in mental possession with a change in wardrobe, or a clever sue of different hair styles/makeup, in Oh My Ghost, it’s depicted almost entirely the actress’s change in posture, mannerism, and inflection. A great acting job that makes it easy to tell who is “in charge” of the character’s body at any given time.

Cho Jung Seok, the actor playing Kang Sun Woo, is just as charming in this role as he was in You’re the Best, Lee Soon Shin. And actually, while waiting week-to-week for new episodes of Oh My Ghost to come out, I went back and watched You’re the Best because of Cho Jung Seok. It should be noted that while his characters in the two different shows have different circumstances—different job/family/relationship situations—the actor plays the characters the same way. The exact same way. So much so that it was a little shocking flipping back and forth between series.

Oh My Ghost is highly recommended for the continuing Kdrama viewer looking for a romantic comedy that doesn’t get too melodramatic with a strong, escalating dramatic plot (I haven’t even hinted at it here, but it has to do with solving the mystery of how the ghost Soon Ae died).  It’s absolutely made my “Best of 2015” list.

A Bit About Me

(Favorites of those I’ve reviewed) currently in alphabetical order:

About the Speak Coffee to Me Blog and Eccentric Review:

This blog’s predominant theme is . . . well, it doesn’t really have a predominant theme. Most items fall under stuff I find interesting enough to write about.  There’s writing and storycraft articles, a few how-tos, and some reviews of Korean TV dramas. It’s eclectic. And eccentric. It’s hopefully vivacious, which is what I mean when I say, Speak Coffee To Me.